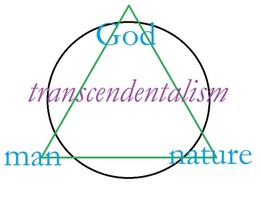 "Transcendentalism is an American literary and philosophical movement that developed in New England in the 1830s and '40s...Transcendentalism [emphasizes] individual intuition as a central means of understanding reality. Keyed to this idea [is] a belief in the presence of God in nature... The individual's soul mirrors the world's soul, and we can arrive at these truths by communing with the beauty and goodness of nature " (Quinn).

Click HERE to find out how much you've learned so far and what you still need to find out!